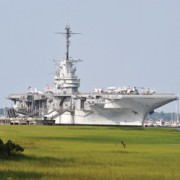 We’re honored to have been chosen to deploy access control security at South Carolina’s Patriots Point Naval & Maritime Museum — home to the famous USS Yorktown Essex-class aircraft carrier, aka The Fighting Lady. The 40-acre museum complex, operated by the Patriots Point Development Authority, is the number one heritage attraction in the state with nearly 300,000 visitors each year. Read our case study which details how Open Options has helped this relic of the past sail into the future by replacing keyed locks with an electronically controlled access control security solution.

In 1975, one of the most revered Naval aircraft carriers — the USS Yorktown — was relocated to Mount Pleasant, South Carolina, to star as the centerpiece attraction of the newly developed Patriots Point Naval & Maritime Museum operated by the Patriots Point Development Authority.

Over the last four decades, Patriots Point has become South Carolina’s number one heritage attraction with nearly 300,000 visitors each year. In addition, the USS Yorktown offers one of the largest education and overnight camping programs in the United States with more than 40,000 school-aged children participating in these programs each year...

We’re On The Road This Month With Access Control Solutions Events Across...
Scroll to top