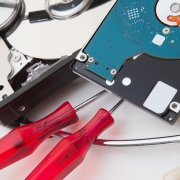 Administrators at a school in the southern region of the U.S. were stressing out over the failure of its access control system to launch. The dealer had attempted multiple times to restore the access control on campus but was not able to get the system up and running. Desperate, they needed expert technical help. They made the call to Open Options Tech Support.

“They explained they were not able to get DNA Fusion to launch and the site had been having issues for a long while,” said Nic Robran, Technical Support Manager, Open Options. “They got connected with our Tech Support supervisor Zack, who immediately took steps to get remoted into their system, so he could jump on the problem.”

The Open Options Tech Support expert diagnosed the issue rapidly: the DNA driver could not start because not only was the system hard drive full, but the DNA Fusion database was full as well. The first action he took was to address the large database size to free up room on the system drive. He noticed the transaction log was sitting at 188GB as SQL was set to full recovery and the limit was not set on the transaction log, which allowed it to balloon to that size.

He set the recovery mode to simple, limited the transaction log to prevent overgrowth, and then he executed the shrink command via SQL on the log files. This reduced it down to just 16MB, which gave much more free space on the system drive. He then got them set up for archiving, which also assists in keeping the database from getting too large.

“His actions and settings allowed the DNA driver to start, and they were able to launch DNA Fusion,” explained Robran. “Since those settings were not set correctly, that is why they had been having ongoing issues with DNA Fusion. Zack’s SQL expertise groomed their system to be more efficient and will prevent them from having further issues with database overgrowth.”

After he completed his configuration changes, he added more value for the customer at the school by creating a backup of their database. He increased the functionality and reliability of DNA Fusion as well as increased PC resources available to ensure, going forward, the system would not get bogged down.

Open Options Training Takes a Bite of the Big Apple

Customer Tells Integrator: Figure it out; Open Options Sales to the Rescue
Scroll to top