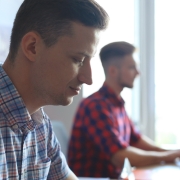 A large end-user customer with a household brand name had been having employees take a DIY approach to access control. It was a flop. Each department was making DNA Fusion function differently because of a lack of understanding, causing pain for colleagues in other departments at other locations. Training from Open Options was the answer to doing it themselves.

Prior to training on DNA Fusion, one location thought they had to create new time schedules every time they needed to make a new access level, while another location was unaware that access levels could be adjusted. The customer needed help taking better control of DNA Fusion and using it to their full benefit, especially with customizing the software interface for specific operators and adding cardholders.

“Without a full understanding of the software, there was a lack of cohesiveness in changes that were being made to cardholders, access levels and time schedules,” said Brittany Tate, Technical Trainer at Open Options. “The employees were a mix of self-taught learners who were accustomed to a different software that was more limited than DNA Fusion. They were looking for a way to customize their access control software without causing confusion for other departments.”

The customer arranged for on-site training with an Open Options training specialist for five of their most involved users to take back to their individual departments and help spread the knowledge.

For example, they were previously accustomed to adding cardholders, but wanted more ways to categorize them. The Open Options trainer worked through numerous scenarios where they were able to add personnel groups and make custom fields more cohesive. She equipped these power users to prevent issues from occurring as well as doing more effective troubleshooting.

One participant said, “I’ve been in DNA Fusion for a few years, but I had not been taught how to use it properly. I’m actually learning stuff in this class that I can change right now." Another participant said, "Those drag and drop options are amazing. I never knew there were so many ways to assign access levels and even copy levels from one card to another. Open Options makes things easy."

Because of the training, those responsible for adding hardware and time schedules now understood how their descriptions impacted those responsible for access levels and personnel. Furthermore, learning about the option to add a card block was so well-received that one participant called it “a game changer for us.”

Tate summed it up: “With the help of providing real-life scenarios, one-on-one attention and live equipment, Open Options Training was able to bridge the knowledge gap. By the end of class, everyone had a better understanding of how their department could work together to make DNA Fusion work best for them.”

Do you need to register for an upcoming class?

How Is Technology Reshaping the Security Discussion for K-12 Schools?