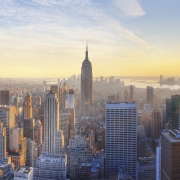 To kick off the new year, the Training department of Open Options was in a New York state of mind when they headed to the city that never sleeps to provide training on DNA Fusion for a customer who was considering Open Options’ market-leading access control solution to over 350 locations across the state of New York.

“They felt they would benefit tremendously by obtaining a deeper understanding of the system’s functionality,” said Sherinda Barrow, Director of Education Services at Open Options.  “The site is an integration between Open Options and ISONAS. The system user was interested in learning more to assist them with developing a firm foundation that consisted of best practices combined with a solid understanding of the system.”

The system users applied the training to standardize the functionality of the system, using the best practices that were established in the class. After the training, the customer realized that they could accomplish numerous tasks within the DNA Fusion application to support their various facilities.

Feedback from participants in the training class was positive. “I learned a lot of useful things during this course,” said one user. “Most training classes are boring, but I really enjoyed this training from Open Options.”

This training class in New York was the culmination of multiple training sessions, starting with a WebEx session with five system users before the implementation of the system. They were so pleased with the system that they turned one of their facilities into a live test environment.  Subsequently, the test went extremely well, leading to the widespread rollout.  At every major stage, equipping the system users through training was a key to success.

Do you need to register for an upcoming class?

Integrator Realizes Value of Professional Services for Access that Connects